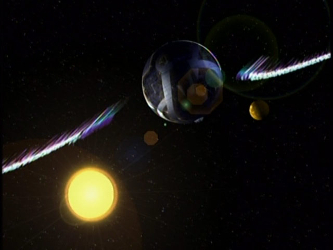 "If you see me coming, it's because I want you to."

Eclipse would really prefer to just be a spy, but she is just so very talented at killing. So while most of her duties put her in the former category, usually it is so she can eventually end someone else's spark.

Forged a long time ago, though not so far as the thirteen, she has seen corruption take even the most seemingly greatest of leaders. And more often than not she became a weapon of that corruption. At first she was young and excited to be useful. Ignoring the politics for the thrill of the hunt, the kill, and the praise. But then she began to notice, more and more, those she was sent against were not really dangers to anyone. Often times it was vendettas and spite. Her duty to protect the government from collapse from hostile forces and alien spies became tainted. And with it her ability to trust.

When she was recruited to topple the corrupt government she was more than happy to. Once again filled with a sense of purpose, instead of dread, to do that which she was designed and -good- at doing she joined with Megatron. In the end she was there for the fight between him and Orion. The words Orion said sounded so much like what the former corrupt leaders had spouted once, it just didn't sit right. So she was more than happy to side with the Decepticons. And when Optimus Prime arose it only verified that worry for her. But she also knew that someone had to keep an eye on this new leadership.

Since then she has been watching and waiting to act. While everything on the surface of the Autobots seems like they're doing good, so did leaders of the past. She was not convinced and likely not to be.

Yet for all her dedication she was still lost just before the Shimazi war. Considered MIA and presumed dead, she reappeared thousands of meta-cycles later from a dimensional rift. Leaking psychosonorum gas no less and seemingly only minimally effected by it, except for the total amnesia.

Eclipse is a killer and she admits it and owns it. It doesn't bother her at all in fact. However she does have a sense of honor, even if it isn't the normal one you would find. She will follow orders, but ask her to kill too many innocents or those who simply are thinking or being different and you are likely to be her next mark. Shooting actual enemies and those who wouldn't hesitate to put a bullet in you? Oh yeah, that is what she is for. But an outspoken bot about corruption in government? Or someone close to them to influence them? She is done with that BS.

Sure she could blast off into space and find peace, but she is not made for peace and she knows she wouldn't find it among the stars. And besides, she has to make sure to be around to take out the leaders, whoever they become, if they start getting too big for their britches. Which she is absolutely sure any Prime will do in time. So she stays and realizes that in the end, she may not be fully on either side, but she will always be part of toppling governments that have gone too far. And she can't honestly say that the Decepticons will be any better once they gain power. The 'Survival of the Fittest' ideology suits her fine, as a sniper, but she also knows there is more to that. While politics give her purpose, she hates them.

It may be because she has such a flippant regard for life that she speaks flippantly and with great sarcasm. Though a lot of it has to do with her just realizing that life will be what it is and if she takes it too seriously she is going to end up like all the other zealots in the universe. So dark humor, sarcasm, and snide remarks are how she presents herself. Despite being a sniper and generally working alone most of the time she has a want for company and friendship. Too bad she is horrible at it, often driving people away with one snide comment too many made in jest.

To upload an image, simply click the empty infobox template on this page where the image ought to be (it should show a broken link that says "80px") to bring up the file upload tool. Upload your image, and give it the same name as your character page.