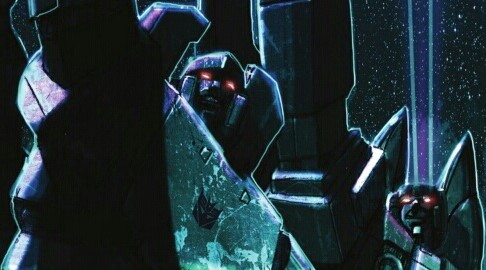 Valour is a brave warrior willing to give his live for the people of Cybertron. He believes in the Decepticon cause with the fervor of a revolutionary. In his optics, the Autobots are a corruptive force that needs to be stopped, no matter the cost. In root mode, Valour is a skilled swordsmech, light on his feet and with graceful poise in battle. In tetrajet mode, Valour is fast and furious, armed with a heavy rotary cannon and dual rocket pods. Although very sure of himself and his cause, Valour can sometimes despair over the plight of planet Cybertron, and when he does, he requires others to shake him out of his doldrums and put him back on the path to victory.

Valour was a privileged writer living in Vos when he first encountered After the Ark: Nominus Prime and the Illusion of Progress. The treatise affected him deeply, and instilled in him a yearning to ease the suffering of the common working man, something he admittedly had little direct experience with in his elite ivory tower. When Megatron led the uprising in Kaon and killed a Prime, Valour rushed to sign up with the new revolution, flush with ideological fervor.

Valour took part in minor terrorist attacks – mostly throwing bottles and bombs at cops and then fleeing before major security apparatus arrived. When Megatron overthrew the Senate and yet another Prime, however, Valour was there, and exulted at the idea that the long reign of Primes would be ended. When Megatron was stopped and yet another Prime rose to power, Valour was crushed, but vowed to fight on.

Then suddenly Megatron was exiled and Scorponok was in control of the Decepticons. This has been a nightmare for Valour, who believes in Megatron’s revolution, not Scorponok’s “survival of the fittest” mantra. For now, Valour is towing the line, hoping and trusting that Megatron will return. With each atrocity committed by Scorponok, however, Valour’s loyalty is tested, and he’s rapidly reaching a crisis of conscience.

Armament: Poet or not, Valour is a warrior, and is armed as such. Aside from his sword, Valour is armed with standard Seeker-lasers in robot mode, and in his tetrajet mode he’s armed with a ballistic rotary cannon as well as dual missile pods. While he doesn’t have the firepower of a Decepticon commander, he can hold his own in ranged combat when necessary.

Courage: His NAME is Valour, so you’d hope he has some courage. In Valour, however, it’s practically a death wish – he wants to go down in a blaze of glory, so if anything, he’s looking for chances to put his life on the line for the sake of what believes to be Cybertron’s future. In battle, nothing short of Metroplex will make Valour pause, and if Megatron asked, Valour would lead an attack against even Metroplex without a second thought.

Swordfighting: Even before the war, Valour was into fencing. Once merely an athletic pastime, Valour has put his passion for swordplay into effect on the battlefield. While Valour’s rapier may look puny compared to the Dynobots’ broadswords, in Valour’s skilled hands it can be much faster and almost as deadly. Although he has a variety of ranged weapons, when given his druthers Valour is most comfortable as a melee fighter.

Writing: Valour’s least-public ability is his skill with words. Valour spends much of his time writing. He has a large collection of poems and private treatises about revolution and his dreams for Cybertron’s future. Thus far Valour has been shy about sharing his words with anyone – especially now, since his works are heavily influenced by Megatron’s writings, which aren’t exactly welcome during the reign of Scoponok.

Depression: The flip side of Valour’s passion is his despair at the plight of Cybertron, especially with Prime ascendant and Megatron in exile. Sometimes Valour feels too much, and it interferes with his focus and drive. With Scorponok in charge of the Decepticons, Valour finds himself in anguish for his faction and his planet. When Valour gets melancholy, it sometimes takes an external kick to get him back in action.

Light frame: While Valour is an excellent fighter and extremely fast on his feet, the tradeoff is an extremely light frame that moves quickly but lacks the ability to really take a punch. Valour didn’t come up through the underground fights like many Decepticons – he’s fast, but not tough. One good shot can take him down, and then all the courage in the world isn’t going to keep him in the fight.

Social anxiety: Valour is charismatic on the battleground, but outside of combat Valour is shy and a little awkward. Deep down Valour is an elitist who tries too hard, and doesn’t fit in very well with the largely working-class Decepticons. Valour is a dreamer who expresses himself best in writing, but for all his battlefield bravery is too nervous to actually show his writing to anyone else. He’s secretly afraid of being called a Sensitive New-Age Decepticon, especially since they may be right.